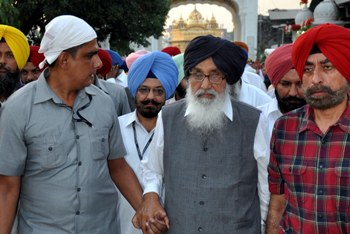 They have fought over sharing of water, territory and even the state capital Chandigarh. Punjab and Haryana are now in confrontation over an unlikely issue - the management of gurdwaras or Sikh shrines in Haryana.

After the Congress government in Haryana bulldozed its way with its controversial legislation to set up a separate Sikh committee to manage gurdwaras in the state, the ruling Shiromani Akali Dal in Punujab hardened its opposition to the move.

While seeking the immediate intervention of the central government, Badal even threatened to resign over the issue.

Party sources here say that an agitated Badal was willing to let the Akali Dal-BJP government in Punjab fall.

Both parties have run an alliance government in the state since 2007. They have been allies for nearly four decades, and Badal's daughter-in-law Harsimrat Badal is a cabinet minister in Prime Minister Narendra Modi's government.

"What has upset Badal most is that Hooda, who for the past decade has been trying to set up a separate committee for Haryana gurdwaras, was not able to do it when the Congress-led UPA was in power in Delhi. The Hooda government rushed through with the new law this week and the BJP-led NDA government could not stop it," a senior Akali Dal leader told IANS here.

"The action of the Hooda government is unconstitutional and illegal. The central government must intervene immediately and stop Haryana from dividing the Sikh community. This will disturb peace in the region," said an upset Badal.

"The Hooda government has played into the hands of a section of Sikh leaders in Haryana who lost the SGPC polls. We (Akali Dal) won all seats in the SGPC in Haryana. How can they take away control of the shrines from an elected body?" Badal asked.

The Akal Takht, the highest temporal seat of the Sikh religion, jumped into the row by excommunicating three Haryana Sikh leaders.

They include Haryana Finance Minister Harmohinder Singh Chatha. The Akal Takht ordered that no Sikh will have anything to do with Chatha and two others, Jagdish Singh Jhinda and Didar Singh Nalwi.

The Haryana assembly Friday passed a bill under which a new Haryana Shiromani Gurdwara Parbandhak Committee (HSGPC) would be set up to manage gurdwaras in the state. The Haryana Sikh Gurdwaras (Management) Bill, 2014, got the assent of the Haryana governor.

"The Hooda government conspired to bring the HSGPC bill as a money bill and got it passed immediately. The governor's assent was also obtained very fast. The whole thing was rushed through. All this was done so that the bill did not have to be sent to the president of India," Punjab Education Minister and Akali Dal leader Daljit Singh Cheema said.

Chief Minister Hooda has maintained that whatever was done by his government was "as per the demand of Sikhs in Haryana" and the passing of the bill was absolutely legal.

There are 72 gurdwaras in Haryana under the SGPC and they contribute over Rs.300 million (Rs.30 crore) to the SGPC kitty.

The SGPC, which has a Rs.950-crore budget, controls a majority of the gurdwaras in Punjab, including the holiest of all Sikh shrines Harmandar Sahib, popularly known as the Golden Temple in Amritsar. - IANS