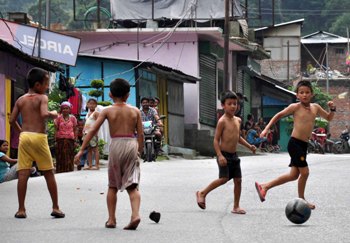 The allocation for the sports and youth affairs ministry for 2014-2015 saw a rise of Rs.561.24 crore -- a 46.5 percent hike -- from the last fiscal with the government Thursday announcing plans to improve infrastructure in Jammu and Kashmir and Manipur.

Finance Minister Arun Jaitley allocated a total of Rs.1,769 crore in the first budget of the BJP-led National Democratic Alliance (NDA) government. It was Rs.561.24 crore more than Rs.1207.76 crore allocated by the Congress-led United Progressive Alliance (UPA) II in 2013-14.

Jaitley allocated Rs.400 crore for the development of Indian sports, including upgradation of sports infrastructure in Jammu and Kashmir, a sports university in Manipur and training for athletes for the upcoming Commonwealth Games and Asiad.

The biggest beneficiary was the state of Jammu and Kashmir, where the government will be investing Rs.200 crore to upgrade indoor and outdoor stadiums to international standards.

"Jammu and Kashmir has a lot of sporting talent which is not finding expression due to inadequate sports facilities. I propose to provide a sum of Rs.200 crore for upgrading the indoor and outdoor sports stadiums to international standards in Jammu and in Kashmir Valley," Jaitley said while presenting the general budget in the Lok Sabha.

Jaitley also said that a sports university will be set up in Manipur. For this, Rs.100 crore will be provided in the current financial year.

"I also propose to set up a sports university in Manipur. For this I am providing a sum of Rs.100 crore in the current financial year," he said.

Jaitley also allocated Rs.100 crore for the training of sportsperson for the Glasgow Commonwealth Games starting July 23 and the Asian Games in Incheon in September.

"Sports are an integral part of growing up and personality development. Unfortunately, in our country, sports have not been main-streamed to date. The government will set up national level sports academies for major games in different parts of the country to mainstream sports," he said.

The sports academies will provide international level training facilities at junior and sub-junior levels. Academies will also be set up for shooting, archery, boxing, wrestling, weightlifting and track and field events.

There was also a significant rise in the budget allocation for the Sports Authority of India (SAI), which is the nodal agency for sports in the country. This time SAI has been allocated Rs.405.10 crore -- a significant hike from last year's Rs.320.45 crore.