Where is Breaking News? Modi govt tightens grip on information 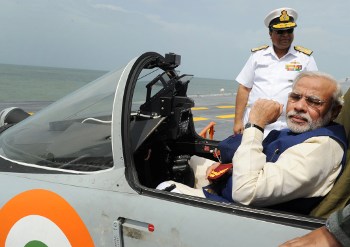 Among the subtle changes associated with Prime Minister Narendra Modi's government are those dealing with the media and nowhere has it affected a news-hungry media's working more than in the way news sources from the government have completely dried up and resulted in shrinking of the culture of intermittent Breaking News on television.

Earlier, during the UPA government, Breaking News used to be the daily staple of news television that used to thrive in 'breaking' news from and about the government all through the day, some accurate, some not so accurate - and mostly sensational.

But that is history. With ministers and top officials being evidently instructed by the all-powerful Prime Minister's Office (PMO) to clamp up and not engage or entertain the media unnecessarily, it has resulted in a virtual news drought for 24x7 media, particularly television and social media that in a sense used to thrive on it and derive their revenue-generating eyeballs.

There have been innumberable instances during the previous UPA government - especially in its dying years - when information had "leaked" from official meetings like those of the cabinet - chaired by none other than the prime minister - and made it straight to the "Breaking News" on TV channels.

Even differences among ministers during cabinet meetings chaired by then prime minister Manmohan Singh had many a times become "breaking news" within hours.

But this is not happening anymore, at least for now.

With Modi focusing on building an "accountable" system that will curb the culture of sensational journalism, orders have been given to give the media only one version - the official one, sources in the know told IANS.

Even though it is too early to comment on a little over a one-month old BJP government's working style, the reluctance amongst its ministers to talk to the media is seen by many members of the fourth estate as a "media gag".

But officials dismiss this notion, although no one is willing to come on record.

"What has changed in this new government is that everyone, including the secretaries, are accountable to their seniors. So unlike previous government where many secretaries would leak out information to the news channels, this government believes more in officially communicating with the media," one source told IANS.

"A clear message has also been given that one can be pulled up if something appears on television or in the print media which has not been officially communicated.

The reference was to the meeting between Modi and the 77 secretary-level bureaucrats on June 5. The official line about the meeting was that Modi had asked the secretaries to make the government "people friendly".

"It is felt that this breaking news culture syndrome is extremely harmful and can lead to misleading information. This government wants to make sure that nothing of this sort happens," another source told IANS, while seeking assurance that he was not identified.

"In the absence of any accountability, media channels had many internal sources and there was a kind of a fight to break the news first," said the source, who is familiar with official communications.

"There is no doubt this government is totally different from the previous one in this regard and this fact is not going down well with the media," the source said.

Adding to the media woes is the fact that the ministers are reluctant to talk to reporters. Many ministers have privately told journalists they knew as opposition leaders that they have been "instructed" to keep quiet and not give unnecessary bytes or interviews, without "clearance from the top".

One senior journalist, who tried to get written answers from External Affairs Minister Sushma Swaraj was, after three weeks, told by her aide "to forget the interview for the time being as it is not going to happen." He did not elaborate.

The sources said one reason could be that these ministers - most of them are handling a ministry for the first time - are taking their time to settle in and understand issues before they talk about them.

"This time around 70-80 percent ministers are new. They are taking time to understand the issues and what their 100-day's plan will be. They don't want to get into any unnecessary controversy," another official added.

"So, till then, whatever they have to communicate is being officially done either through the PIB (Press Information Bureau) or Twitter. This is also another reason for less breaking news as everyone is getting the news at the same time," he concluded. - IANS