My only fault is I'm a woman: Preity Zinta 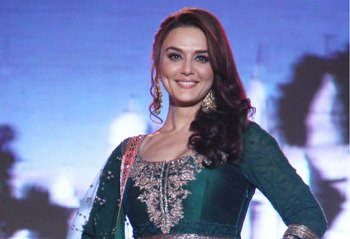 Bollywood actress Preity Zinta Wednesday said that her police complaint against Ness Wadia is not "frivolous or immature" and that "my only fault is that I am a woman who reached a breaking point after constantly being abused, threatened and humiliated".

Preity recently filed an FIR against her former beau Ness, alleging that he molested her. She wants the people to "have a little patience and wait for all the facts to come out".

"This is not a frivolous or immature complaint to the police. I have never lied in the past and do not lie when it suits me or is convenient. I am a responsible citizen of this country and my only fault is that I am a woman, who reached a breaking point after constantly being abused, threatened and humiliated at work by someone who once was very dear to me," the actress said in a post on her official Facebook post.

Raising her voice for women power, she said: "Violence and aggression against women is wrong, yet people try to point fingers at the woman who comes out with it trying to make her sound frivolous and with ulterior motive.

"My only motive is to fight for my self and this fight is not against any family but an individual. If the media found out about my complaint, and it became a big deal what can I do about it? Did I call for a press conference? NO I did not. I actually asked people and the media to respect my privacy."

She reiterated that "my motive is not to harm anyone but only to protect myself". - IANS