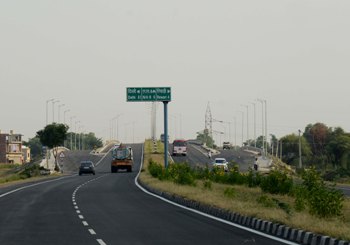 A cutting-edge technology pioneered by an Indian engineer deactivates mobile phones before they can cause accidents or deaths on the highways.

"Even a momentary distraction while dialling a number or chatting on the cell phone can result in an accident or fatalities on the road," H. Abdul Shabeer, the man behind the innovation, told IANS on the phone from Salem in Tamil Nadu.

The tiny 6x5 cm device, mounted above the steering, can detect radiation emitted by the driver's mobile phone, especially when the vehicle is in motion, and immediately switch it off, said Shabeer. The low cost device, powered by the vehicle, can differentiate between a mobile phone being used by a driver or any passenger in a van or a bus, even if many of them are making simultaneous calls.

"This differentiation is crucial because the driver holds the steering, with a direct bearing on passengers' safety," said Shabeer.

The system could be a boon for a country like India, accounting for the highest number of road accidents worldwide, claiming thousands of lives every year, according to reports.

"Other commercial systems operating abroad, unlike ours, do not have the capability to differentiate whether a mobile phone was used by the driver or the passenger," Shabeer said.

As soon the driver's use of cell phone is detected, especially when the vehicle is in motion, the jammer flashes warning beeps within five seconds. If he still continues with his chat, a micro camera will click him in the very act and transmit it along with the number plate to the traffic control room or near a signal post so that police can act on time.

If anybody tries to damage or remove the system, then the device will automatically transmit the vehicle's registration number to the control room.

Shabeer and his research associates spent six years testing the jammer on scores of cars, vans, SUVs, auto-rickshaws, buses and trucks before perfecting and miniaturising it. They used a Blackberry 8520 cell phone and GSM connection for the purpose.

The idea of a jammer germinated in Shabeer's head years ago after a school friend, Balamurugan, met with a horrific accident while driving and chatting on a cell phone.

Shabeer has applied for a patent on the product, which is ready for commercial applications. - IANS