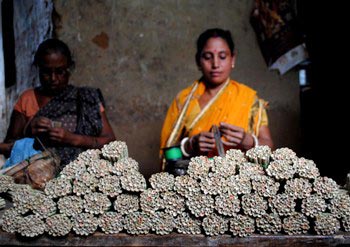 While smoking rates have fallen among Indian men, they have risen among women. A factor, doctors say, that can be attributed to rising cases of infertility and higher risk of cancer among Indian women these days.

A study published earlier this year in the British Medical Journal and which was earlier carried by the The Journal of the American Medical Association (JAMA) examined the prevalence of smoking and cigarette consumption in 187 countries between 1980 and 2012 and found that while cigarette smoking among Indian men has fallen from 33.8 percent in 1980 to 23 percent in 2012, it has risen from three percent to 3.2 percent among Indian women within the same time frame.

In absolute terms, the number of female smokers in India has more than doubled - from about 5.3 million to 12.2 million in that time frame.

Commenting on the trend, Nevin Kishore, consultant in Pulmonology at Max Hospital, said the changing lifestyles are leading to more women taking up smoking in the Indian scenario.

"The effects of smoking, like lung damage, do not show in a person who smokes about four-five cigarettes a day in the initial few years. Although tobacco does not discriminate on the basis of gender, women smokers are more at risk of infertility. They also face the risk of all kinds of cancer," Kishore told IANS.

Agreed Sapna Nangia, oncologist at Apollo Hospital. "There has been a rise in the number of women smoking cigarettes and there are two main reasons for it.

"The first is a carefully devised plan by the tobacco industry which has faced a lot of lawsuits in this regard in the west, and has therefore realised that instead of going on facing the difficulty of advertising their product there, it would be easier to encourage women in India and China to smoke under the pretext of making smoking a socially acceptable norm," Nangia told IANS.

"If women in India and China started smoking in big numbers, the tobacco companies felt that they would no longer have to depend on the west. This, plus a mistaken notion that smoking denotes independence of women, has led to the numbers rising," she added.

Nangia however stressed that the upward trend is only in the urban areas, because "women in the rural areas have always consumed tobacco in high numbers".

Kailashnath Gupta, pulmonologist at Columbia Asia Hospital, went on to say that the consumption rate of smokeless tobacco has also risen among women.

"Tobacco does not differentiate, but the effect of smoking on pregnant women and those in the reproductive age group of 22-40 can be detrimental to the foetus and on their fertility," Gupta said.

He also said that while the overall number of smokers in India has increased, the percentage of smokers has come down "since it's in relation to the size of our population. I also think that the younger generation today, those in the 20-25 age group, is smoking lesser than of the yesteryears," Gupta added.

His words find resonance in the study which revealed that although the prevalence of cigarette smoking in India has dropped by over five percent over the last three decades, the number of smokers in India has risen from about 74.5 million in 1980 to 110.2 million in 2012.

However, as compared to 1980 when Indians used to smoke an average of 11.6 cigarettes a day, now they average 8.2 a day. The study used data from several multinational and national surveys, including the Global Adult Tobacco Survey.

India is the third largest producer of tobacco and the second largest consumer of tobacco products worldwide, the study said. A different study in 2012 further found that 42 percent of cancers in men and 18.3 percent cancers in women were related to tobacco consumption. Cardiovascular disease is also linked to it.

"The only way out of this health mess is for the government to implement the anti-tobacco laws more effectively. Increasing taxes, I feel, hardly discourages people, and it's only the government that benefits.

"Advertisements against tobacco usage like the ones in movie theatres is one of the best ways to make people aware and therefore discourage them," Gupta said. (May 31 is World No Tobacco Day) - IANS