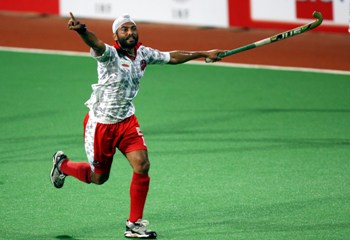 India registered a resounding 4-1 victory over South Africa here in their last warm-up game ahead of the hockey World Cup.

India dominated from the start when vice-captain Rupinder Pal Singh made no mistake in converting a penalty corner to take a 1-0 lead which they carried till the break Wednesday. In the second half, it was Rupinder again who converted another penalty corner to further add on to the lead and make it 2-0.

South Africa managed to convert a penalty corner out of all their opportunities to reduce the margin. But India restricted them from scoring any more by demonstrating a strong defence line-up.

Captain Sardar Singh contributed through a field goal and raised the score to 3-1 followed by V.R. Raghunath's successful penalty corner to seal the victory.

"The first half turned out to be a little slower than expected. But the second half saw a really good performance by the team where defence also gave an excellent response. We are happy to see both Lalit Upadhyay and Yuvraj Walmiki living up to the expectations," India's director-high performance Roelant Oltmans said.

"The team has been preparing for a long time now and it is time for the boys to deliver their best. I am confident that the boys will perform well in this tournament."

Sardar said the team is beginning to show results.

"It was the second practice game and I am glad the team is showing good results. The good part is that we all understand the wavelength and carry on with the game with the same mindset," said Sardar.

"This win against South Africa will further help in boosting the confidence of every player and especially Lalit and Yuvraj as this was their first game. We are ready to take up more challenges and deliver even better results in the tournament."

India will clash against Belgium in their first game of the World Cup Saturday. - IANS