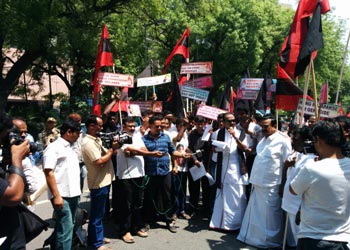 The MDMK, an ally of the BJP, staged protest at Jantar Mantar in the heart of city.

"We have come to Delhi to protest the arrival of the Butcher of Tamils," Vaiko said.

Sharif waved to the media persons as he walked on the tarmac of Delhi's airport.

Before leaving Lahore for New Delhi, Sharif told reporters that he is carrying a message of peace from Pakistan.

He is accompanied by Advisor to the Prime Minister on Foreign Affairs and National Security Sartaj Aziz and other top officials.

The leaders of SAARC nations and Mauritius have been invited to the swearing-in ceremony of Modi at Rashtrapati Bhavan. - IANS

Just in
Vaiko, 100 others detained over Rajapaksa visit