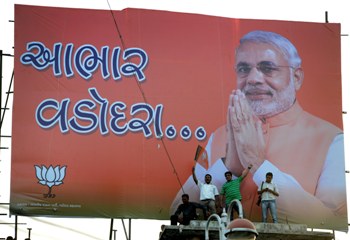 An anti-Narendra Modi comment on Facebook may now lead to the arrest of a 31-year-old shipbuilding professional, even as police in BJP-ruled Goa suspect a "larger game plan to promote communal and social disharmony in the state".

Civil society groups as well as the opposition Congress have slammed the move.

Devu Chodankar's anticipatory bail was rejected Thursday by the district and sessions court in north Goa, clearing the ground for his arrest.

Police Inspector Rajesh Job of the Goa Police cyber cell, which is investigating the case, in his statement filed before the court, sought custodial interrogation of the accused.

"Custodial interrogation of the accused is very much essential to find out any motive of larger game plan to promote communal and social disharmony in the state," Job said.

Two summons have already been issued to Chodankar by the cyber cell.

In the run-up to the Lok Sabha 2014 poll campaign, Chodankar, who is from Mumbai, had in a post on Goa+, a popular Facebook group with nearly half a lakh members, claimed that a holocaust would follow and that Christians in Goa would lose their identity.

"There is imminent threat of Holocaust as it happened in Gujarat th(r)ough the garb of cunning government policies of Parrikar (sic)," Chodankar said before deleting the post.

Subsequently, in Goa Speaks, another Facebook group well known for discussions on Goa-related issues, Chodankar apologised for his choice of words but not the sum of his argument.

But Atul Pai Kane, who regularly defends the BJP and Chief Minister Manohar Parrikar on social media, lodged an FIR against the shipbuilder. In his complaint, Kane said Chodandkar had threatened Facebook users against voting for the BJP in the Lok Sabha polls.

Opposition parties at the time protested, calling it an attempt by the BJP to muzzle criticism but the BJP denied it.

"The complaint is against Chodankar for making inflammatory statements and trying to create communal disharmony, not comments against the BJP," Kane contended.

Chodankar has been booked under various sections of the Indian Penal Code, the Representation of the People Act and the Information Technology Act. Some of the sections are non-bailable in nature.

Civil society activists have now jumped into the fray claiming that such heightened police interest in a Facebook post is draconian. A protest will now be held Saturday outside the police headquarters in Panaji.

"We will raise slogans, hold placards protesting against application of draconian laws to curb free speech. Today it is Devu, tomorrow it could be any of us," Samir Kelekar, an Indian Institute of Technology (IIT) Bombay alumnus, told IANS.

Later, the Congress too joined the chorus against Chodankar's arrest, claiming the Cyber Cell was a virtually dead unit of the state police which has now been specially revived for the purpose of harassing the Modi-baiter.

"We will protest tooth and nail against this harassment by the police... During Tarun Tejpal case too we tried to complain against Madhu Kishwar for revealing the rape victim's name, we were told that the cyber cell was not functional," said party spokesperson Durgadas Kamat. - IANS