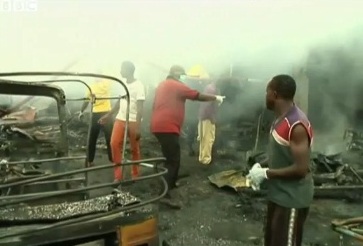 As many as 118 people were killed in the twin blasts that hit a market in the central city of Jos, security agencies said.

"The death toll stands at 118. This is the number of victims recovered from the scene of the explosions, but we are still searching through the smoldering debris for more bodies," Nigerian Tribune quoted Mohammed Abdulsalam, coordinator for the National Emergency Management Agency in the city, as saying.

He said the casualty figures were collated after visits to Plateau Specialist Hospital and Bingham Hospital, Jos.

Earlier, Olakpe described the blasts as "terrorist activities," but refused to speculate on who might be responsible.

President Goodluck Jonathan in a statement condemned the bombings as a "tragic assault on human freedom" and described those behind them as "cruel and evil".

According to Police Commissioner Chris Olakpe, the first bomber came in a fiat bus and parked at the market's central business area. The second blast happened 100 metres from the first and that one was contained in a Siena bus, Xinhua quoted the police chief as saying.

According to an earlier report, at least 46 people were killed and 45 injured. - IANS