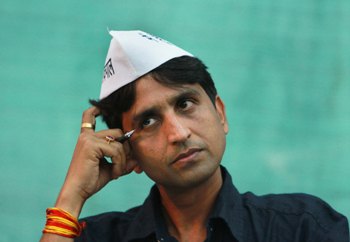 Kumar Vishwas, who is Aam Aadmi Party (AAP) candidate from Amethi, Tuesday alleged that his family had been asked to leave the constituency or face forceful eviction.

According to sources, district police officials late Monday reached the rented accommodation of the AAP leader and asked his wife and other relatives along with the children to leave the constituency.

An official told IANS that this was in line with norms which mandates all non-registered voters, campaigners and supporters of a candidate to leave the constituency after the campaigning has come to an end and ahead of balloting.

Vishwas tweeted that police had threatened to evict his wife, sister and others from their house mid-night. He also dared the authorities to do something similar to Congress campaigner Priyanka Vadra and her supporters.

Senior Election Commission (EC) officials were apprised of the matter late Monday night after which Chief Electoral Officer (CEO) Umesh Sinha is said to have taken a "view on the matter".

Poll panel sources said the district administration was within its rights to take such action but have been asked to be polite, "keeping sensitivities in mind".

While Vishwaas has been camping in the high-profile constituency for the last four months, Smriti Irani is also giving sleepless nights to her political opponents by travelling in the countryside.

Worried at a surging opposition, Sonia Gandhi recently addressed her first election rally in Amethi after a gap of 10 years.

Amethi goes to polls May 7. - IANS