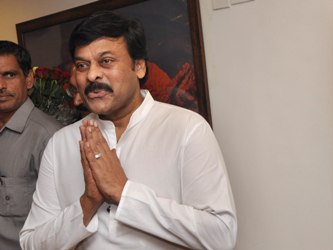 Union minister and Congress leader K. Chiranjeevi faced some embarrassing moments here Wednesday after a voter raised objections when he broke the queue.

A voter stopped the actor-turned-politician and his family members when they tried to walk into the polling centre even as others were standing in the queue.

The superstar was taken aback when the voter told him that he can't get special treatment.

Accompanied by his security guards, Chiranjeevi, his wife, their actor son Ramcharan Teja and other family members were initially standing in the queue at the polling centre in the posh Jubliee Hills neighbourhood.

When some people invited them in the booth, they broke the queue.

As the voter raised the objection, Chiranjeevi tried to pacify him. The actor and other family members went back and stood in the queue to vote.

The actor denied breaking the queue. "There is no question of violating rules. I am not such a person. I respect democracy," he told reporters after casting his vote.