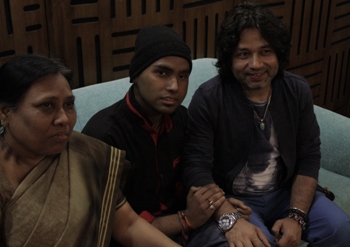 The first time he saw the poster of the April 4 concert at Thyagaraj Stadium in New Delhi dedicated to him and other children and young people with cancer, he cried. He said he wouldn't attend the concert any more. He had wanted to sing alongside Kailash, his hero and idol.

On a trip to Nasik, under the Cankids Make a Wish Programme, he told visiting Fulbright scholar Sara Lederman: " I have worked so hard to get treated. Why am I not being paid for all this hard work? I really want to live."

Also part of this journey "to get the monkey off their backs" as they put it, were surivivors Udit Nijhawan and Kapil Chawla, shooting a film "Making Peace With My Cancer."

As his condition worsened, the 20 year-old student of Delhi University, suffering from a relapse of throat cancer, would tell his closest friends and cancer survivors Ritu Bhalla and Sonu Narain: "Show me the film you have made about my wish to meet my hero and how my meeting made the concert happen. Show it to my mom and my cousins."

Even though they knew his end was close, everyone - his friends, family, Kidscan Konnect, NGO Cankids group of teenage and young adult survivors and peers - was praying and hoping he would be there right up in front of the stage to see Kailash sing.

As he realised that he himself may not be able to attend the Kailash Kher concert, he whispered to Ritu: "Remember me with this photo. Celebrate an Aman day every year. The show must go on."

On the phone from Mumbai, to his grieving survivor friends Ritu, Sonu, Chandan, Sanjeev, Charu and Kapil, Kailash Kher said: "I dedicate the concert to Aman and you to inspire all of you to celebrate life and give up the fear of dying. Aman will be there for the concert - his spirit lives among all of us. He is immortal."

"This is not any other concert. I never realized I would become so involved with this concert. It is a concert that will bring a change - a toofan," he added.

Sonal Sharma, co-founder and honorary director of the NGO's Parents and Survivors Support Groups, said: "Parent Support group members Abha and Usha as well as the survivors were there with Aman and his mother, whether he was at home or at our palliative care centre at Gautam Nagar, or admitted in the pain clinic at AIIMS."

"Aman was always worried about his widowed mother. We promised we will look after her. And we will. This is an important part of the work we do. Providing medical, financial and emotional support from the moment of diagnosis and after," she added.

Poonam Bagai, chairperson of NGO Cankids Kidscan that helped Aman during treatment and planned the concert, said: " Aman was and will always be a hero."

"We dedicate this event to Aman and all those like him who died fighting the disease, his mother Nisha and all those who lost a loved one to cancer as much as to all survivors of childhood cancer and their parents," she said.

Aman Saxena was 17 years old when he was diagnosed with Rhabdomyosarcoma, with a tumor in his throat. He wanted to play the guitar and sing and perform. Instead he battled cancer, survived and then relapsed at the All India Institute of Medical Sciences.

According to a 2009 article in Indian Journal of Cancer, childhood cancer contributes to about five percent of the India's total cancer burden, with approximately 45,000 children diagnosed with the disease every year. Due to better awareness in the developed countries, 80 to 95 percent of the afflicted children are cured but in India, the survival rate is significantly lower. - IANS