AAP to hook Goa voters with cheap fish as bait 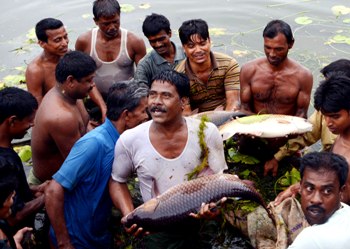 There's nothing fishy about this - just building on past gains. If the promise of 'bijli' (electricity) and 'paani' (water) netted admirers galore for the AAP in Delhi, the party may use cheap fish in Goa as a lure to hook in voters.

While the Aam Aadmi Party (AAP) has not yet formally come out with its manifesto, one of its members said that along with doing away with casinos and keeping a hawk eye on mining, it would also pitch for making fish cheaper in Goa.

"Every Goan loves his fish. But there has been a nearly 100 per cent appreciation in its price over the last five to six years. It's fast getting more and more unaffordable for the common man," Rajendra Kakodkar, a corporate management consultant who is fine-tuning the AAP's fishnama, told IANS.

Pollution, global warming, overkill - both for export and to feed the burgeoning tourism industry - are threatening to trigger a fish famine off the western Indian state's coast and rivers.

In 2010, Goan fishermen netted 23,831 tonnes of mackerel, a spiny, emerald green fish which has been a steady source of marine protein for generations. Last year, the haul shrunk to virtually half at 12,994 tonnes.

The harvest of sharks, which find their way to tables in Goan homes and restaurants as 'ambot-tikh', a red, spicy-sour preparation, has all but disappeared, reducing sharply from 3,159 tonnes in 2010 to 281 tonnes in 2013.

The harvest of prawns, one of the fastest selling seafood, served fried or curried or even as adornments in gourmet cocktails, has decreased from 9,970 tonnes in 2010 to 8,380 tonnes in 2013.

AAP tacticians got down to number crunching and realised that against an annual demand of 60,000 tonnes of fish, the supply in the markets was only 45,000 tonnes.

"The problem is the manner in which fish is exported. While we are not against fish exports, which earn the country foreign currency, out of the 42,000 tonnes of fish which is exported, nearly 20,000 tonnes of different varieties, is priced at below Rs.80 per kilo.

"Are not Goans ready to pay this rate? Why export low-value fish and deprive Goan children of the much-needed protein? We are pushing for a ban on exports of fish below Rs.200 per kg," Kakodkar said.

"When this 20,000 tonnes of fish flows into the Goan fish markets, the demand-supply gap would cease to exist. Fish will be available in abundance and the price of fish will fall to make fish affordable for the aam aadmi," he explained.

The logic has already caught the fancy of fish-loving Goans.

"Fish is a very relevant topic. It affects almost every Goan... so AAP has touched the pulse of the aam aadmi," said Marius Fernandes, reacting to an AAP post on the subject on Facebook.

But there are sceptics too who call the plan hare-brained and indicate that it could trigger fish smuggling. The Goa government has already announced its plans to start a chain of cold stores where the fish would be sold at affordable rates in the wake of the escalating prices. - IANS