The 5 rupee note in your hand may be fake! 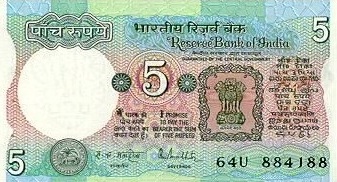 The next time you handle a 5 rupee note, look a little closer - it could be a fake. In what is a disturbing portent for the Indian economy, Delhi Police last year made a recovery of 19,400 such 5 rupee notes - the first time such a large haul was made.

Police officers also said that in most cases of fake currency circulating in India the hand of Pakistan's spy agency Inter-Services Intelligence (ISI) is found. And what has surprised investigators is that most of these fake currency notes are printed in government-controlled printing presses in Pakistan.

These currency notes are so similar with the real ones that it is really difficult to spot the fake one. "Earlier, we used to get fake currency notes of higher denominations. But for the past a three years the scene has changed," the senior police officer told IANS on condition of anonymity."

"Generally people are watchful about possible fakes while handling Rs.1,000 and Rs.500 denomination notes, but no one bothers about such a low denomination as Rs.5," the officer added"

"It is in the past three years that smugglers of FICN (Fake Indian Currency Notes) have started circulating notes of low denomination of Rs.5, Rs.10 and Rs.20 along with those of large denomination," added the officer.

Another police officer told IANS that around 95 percent of the paper used in printing Indian currency is imported from Europe.

"Most of the security features, like engraving of watermark and magnetic properties, are incorporated at the time of producing the paper. A few security features are also included in India," said the officer.

The office" said the "reliability of these European firms is also under doubt".

A senior police officer, who has busted many such fake currency rackets, said that the intelligence agencies in India feel that Pakistan's ISI imports the same paper, ink and magnetic thread from rogue suppliers.

"On the behest of ISI, the FICN are printed in government-controlled printing presses at Karachi, Multan, Quetta, Lahore and Peshawar. The water mark, Ashoka Pillar, Mahatma Gandhi's image, the denomination, RBI mark and other security features are very prominent, clear and look real in FICN printed in these presses," the officer told IANS, but declined to be identified because of the sensitivity of the issue.

According to another officer, both Yasin Bhatkal, founder of Indian Mujahideen (IM), and Abdul Karim Tunda, an important Lashkar-e-Taiba (LeT) functionary, revealed during interrogation that the ISI is the mastermind of large scale smuggling of FICN to India.

"After the government of Thailand recently imposed restrictions, the ISI started using Vietnam and Malaysia for smuggling FICN to India through Nepal," he added.

The police officer said that with special focus on FICN related cases, the Parliament Street Police Station has been made the nodal agency where all fake currency cases are registered at an interval of six months.

Deputy Commissioner of Police (New Delhi), S.B.S. Tyagi, said that in November 2013 an official of the Bangladesh High Commission had deposited a sum of Rs.16 lakh (1.6 million) in a government bank here on behalf of the high commission, of which 10 notes with a face value of Rs.8,500 were found to be fake Indian currency.

"We are still verifying the matter," he said.

But in 2012, the fake notes circulating saw a surprising rise, and Rs.1.73 crore FICN was recovered.

The official said that the ISI uses not only unscrupulous elements but also exploits innocent tourists to sm"ggle FICN into India.

"Unfortunately, unbridled corruption on both sides of the border is extremely helpful to smugglers," he added.

The officer said that Delhi Police have taken up several drives against the suppliers of fake Indian currency.

"The Reserve Bank of India (RBI), Customs and Intelligence Bureau (IB) have also been associated in the drive," he said.

The officer said that in 2013, the Delhi Police had registered 66 cases of FICN of which 19 were solved and 49 people arrested.

While Delhi Police, between 2010 and 2012, arrested 160 people and solved 73 cases after the registration of 138 cases of FICN, they are yet to find out the principal agents. - IANS