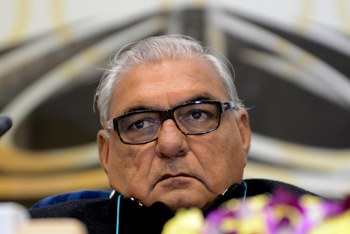 The rookie Aam Aadmi Party (AAP), after its stunning debut in the Delhi assembly elections last December, is giving sleepless nights to established parties in the state that shares borders with the capital.

Senior AAP leader, strategist and psephologist Yogendra Yadav, who played an important role in AAP's political climb, has been touring areas in Haryana even as his party's just formed government is going through its initial hiccups in running the affairs of the national capital.

Yadav's trips to various parts of Haryana have made it clear that the AAP is eyeing the state as its next big stop. Yadav chose to make Ambala the base of the AAP's political activities, saying that Ambala city, 45 km from Chandigarh, had emerged as the state's financial power centre. The obvious reference was to a major political leader who is believed to wield a lot of influence in the Haryana government's decision-making process.

AAP leaders have started enrolling party activists across Haryana in a big way and the new party is getting a good response. The Hooda government has faced a number of controversies over corruption, especially multi-million rupee land deals.

Haryana is set for assembly polls in October and Congress Chief Minister Bhupinder Singh Hooda is facing a tough contest as it is from the opposition Indian National Lok Dal the Haryana Janhit Congress-Bharatiya Janata Party (HJC-BJP) combine - and now has to contend with the AAP. Before the assembly polls, the April-May general elections will give the AAP a chance to test itself in Haryana.

Though Congress leaders and Hooda have tried to wish away the AAP, terming it a non-starter in Haryana, they privately admit that this line could be suicidal, given what the AAP ascendency in Delhi did to the Congress there. The Congress, which had ruled for 15 years, was reduced to eight seats in the 70-member Delhi assembly, with the AAP claiming 28 and the BJP 32. The AAP has formed the government with the Congress' outside support.

The Haryana Congress' core committee is scheduled to meet in Chandigarh on January 21 to discuss political issues. The AAP-effect is also likely to figure.

Hooda has been chief minister since March 2005. This is his second term in office.

During the run-up to the Delhi assembly polls, a large number of AAP volunteers poured in from nearby areas of Haryana. Thus, finding its feet in Haryana's political space is not likely to be very difficult for the AAP.

While the Congress is worried about the AAP's presence in Haryana, the INLD and the HJC-BJP combine too are not taking it lightly. Leaders of both the parties are moving across the state to ensure that their respective bases do not fall into the AAP kitty.

For AAP, the beginning has been made even before fighting an election in Haryana and the state's established parties are extremely wary of this. - IANS