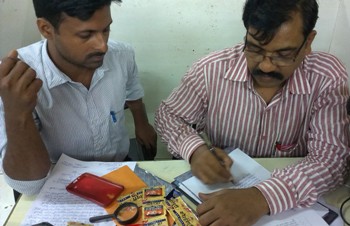 In what is seen as a brutal display of abuse of power, Railway Protection Force (RPF) constables at Kalyan allegedly detained freelance journalist Rajil Menon at a railway lock-up and assaulted him last week.

According to Rajil, the incident took place January 8 while he was taking photos of the police dragging some accused involved in petty offences to the court, illegally handcuffed and tied with ropes.

The previous day, Rajil had taken photos of gutka being peddled within the railway premises with the full knowledge of the Railway police. He had notified the food safety inspector, who visited the railway station to register a complaint.

Following the attack on him, Rajil complained to the Senior Divisional Security Commissioner, RPF, Central Railway, alleging that the Kalyan RPF policemen who arrested him confiscated his cell phone and did not accept his application for grant of “seizure panchnama”.

Rajil says he saw the RPF men dragging the accused inhumanly to the Railway Court premises.

“While taking me to the RPF Police station, the policemen snatched my handset,” Menon’s complaint says.

Rajil is frequently in the news as a social activist and has filed many complaints against hawkers and other miscreants on the railway station premises.

He alleges that RPF officers in plain clothes, and other uniformed policemen without their name badges, subjected him to several bouts of violence, both inside and outside the police lock-up.

“They slapped me, kicked me and knocked me in my stomach, due to which I fell down. I was put in the lock up and was being beaten. S P Singh had held me by my face with a finger inside my ear and another in my left eye and the thumb in my mouth,” he alleges.

“In the lock-up, the Police Officers and Senior Inspector S P Singh again beat me, slapped me and abused me in very filthy, vulgar language,” he said in his complaint.

At about 6 pm Rajil was released on payment of Rs 1000/- as bail. The police did not provide a copy of search-seizure panchanama of Rajil’s confiscated mobile phone, and even a copy of C.R. No.92 of 2014.

“I have earlier complained several times to the RPF about the hawkers blocking the entrance and exits to the Kalyan Railway Station. Due to the blockage essential services including Ambulance and cash vans of the ATM are affected,” he says.

On 31st December, 2013, Menon and a couple of fellow-activists had complained to the DRM, Central Railway.

“Hence, I am being victimized for complaining about hawkers and inaction by the RPF,” says Rajil.