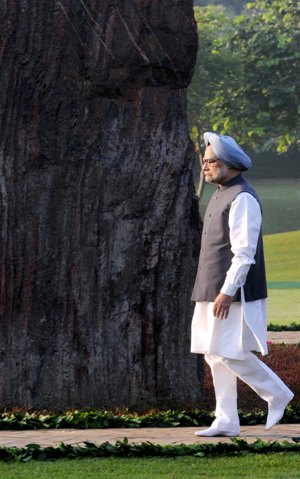 Prime Minister Manmohan Singh Friday declared he will not seek a third term after the national elections in May and launched one of his sharpest attacks on the BJP's prime ministerial candidate Narendra Modi, questioning his credentials for the top job.

In a rare press conference after almost four years, the prime minister stunned everyone when he announced that he was handing over "the baton" to a new prime minister, hopefully from the UPA, after the general elections.

But in his 75-minute press conference, attended by representatives regional and national media, the prime minister reserved the harshest criticism for Modi, saying he would be a disaster if he become prime minister.

"Without discussing the merits of Narendra Modi, I sincerely believe that it will be disastrous for the country to have Modi as the PM," he told the media at the newly inaugurated National Media Centre here.

The BJP angrily protested his comments, saying use of such language lowered the dignity of the Prime Minister's Office.

Asked what he felt about being widely viewed as a "weak prime minister", Manmohan Singh retorted: "The BJP and its associates may say whatever they like but if by strong prime minister you mean that you preside over the mass massacre of innocent citizens in the streets of Ahmedabad, that is the measure of strength, I do not believe that sort of strength this country needs, least of all in its prime minister.

Asked about the Gujarat chief minister's statement that India will be rid of the Congress in the coming general elections, Manmohan Singh answered: "I sincerely believe what Mr. Narendra Modi is saying is not going to materialize."

Manmohan Singh, 81, who has been prime minister since 2004 at the head of a Congress-led United Progressive Alliance (UPA) coalition, categorically ruled out a third term, virtually signalling the end of his 17-year stint in government, 10 of them as prime minister.

He said he would like very much to put the economy back on the growth path before he lays down office in May.

Manmohan Singh, whose government is facing a crisis of confidence, had to contend with pointed questions on his performance and leadership but didn't say who the UPA's prime ministerial choice will be but rooted for Congress vice president Rahul Gandhi.

"Rahul Gandhi has outstanding credentials to be nominated as the prime ministerial candidate, and I hope our party will take that decision at the appropriate time."

BJP leader Arun Jaitley mocked the prime minister, saying the press conference was "intended to announce his (PM's) own farewell." He also termed the press meet a "farce".

Throughout the press conference, the prime minister stoutly defended the 10 years of his government, which faced innumerable corruption charges and allegations of wrongdoing that even led to resignation of some of his cabinet ministers.

Though he acknowledged "some irregularities", he said some of these issues had been "overstated" by the media and opposition and were "peripheral" to the core issues of governance.

Rebutting criticism about his performance, Manmohan Singh said history would be kinder to him than the media or the opposition, adding he had done his best.

"I do not believe I am a weak prime minister. That is for historians to judge... Taking into account the circumstances and compulsions of coalition polity, I have done as best as I could.

"When history is written of this period, we will come out unscathed," he said philosophically. He admitted there were "irregularities" but said the "dimensions of the problems were overstated.."

He also admitted that rising food prices was a key reason why the Congress lost elections in Delhi, Rajasthan, Chhattisgarh and Madhya Pradesh.

The prime minister described corruption as a "monster" but "dealing with (it) is not an easy process even though there may be opportunities as well as challenges.

He agreed that the one-year-old Aam Aadmi Party took power in Delhi by articulating people's concerns over corruption. "Whether they will succeed or not, only time will tell."

He described the Indo-US nuclear deal as his best moment.

Speaking on the dual centres of power, he said it worked "exceedingly well" and there were no hiccups in the relationship between the Congress party chief Sonia Gandhi and him.

When it was pointed out that he has been criticized for not speaking on crucial issues, he said he "has been speaking whenever there was a need and will continue to speak."

Asked about his retirement plans, he said: "It is too early to say as I have to complete my tenure and will think of it when I cross that bridge."

The prime minister, who was born in Gah in that part of Punjab that is now in Pakistan, also said he "would very much like to go to Pakistan".

He underlined that he has five months left to finish his job and has three unfinished agendas - generating jobs in the manufacturing sector, controlling inflation and keeping food prices under check and combating corruption. - IANS