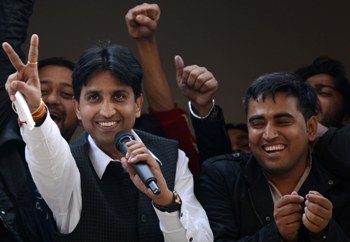 After forming the government in Delhi, the rookie Aam Aadmi Party (AAP) is now focusing on the Haryana assembly poll where it would project party ideologue Yogendra Yadav as its chief ministerial candidate, said AAP leader Kumar Vishwas, who is himself preparing to take on Congress vice president Rahul Gandhi in Amethi in the 2014 Lok Sabha polls.

Vishwas said after the party's victory in Delhi, the AAP's next focus would be the Haryana assembly elections and after that the Maharashtra polls due next year.

"AAP has already launched the process of selection of candidates in Haryana. Yogendra Yadav is among the chief ministerial candidates of AAP," Vishwas told IANS in an interview.

According to Vishwas, Yadav, a well known psephologist and political scientist whose face is familiar to TV audiences and who is now a member of the AAP's key political affairs committee, has already started holding meetings with party volunteers in Haryana and meeting people.

"Yadavji has started holding meeting with party volunteers and the people. We are confident that the party will get the same success as it got in Delhi," he added.

On his own plans for Amethi, Vishwas told IANS: "I will contest election against Rahul Gandhi and I invite Narendra Modi too to contest from the same seat as he is PM candidate."

AAP has started holding jan sabhas or public meetings and road shows in Amethi, a stronghold of the Nehru-Gandhi family.

Late prime minister Jawaharlal Nehru, his grandsons Sanjay and Rajiv Gandhi (the sons of Indira Gandhi), as well as Rajiv's widow and Congress president Sonia Gandhi have all represented this constituency.

Exuding confidence about winning the Amethi seat, Vishwas added: "We want to finish the culture of dynastic politics in the country. And we appeal to all good people to come forward to stop this culture."

Speaking to IANS at his residence in Vasundhara in Ghaziabad, Vishwas said he is a "small man" compared to Rahul Gandhi in terms of economic and political stature but he is quite confident of winning against him.

"I am an aam aadmi (common man)...In front of Rahul Gandhi I am very small, but I want to make sure that I will win the seat as the common people are with me and my party. I will keep following Rahul Gandhi if he changes his seat," said Vishwas.

On Bharatiya Janata Party (BJP)'s prime ministerial candidate, Narendra Modi, he said "Modiji keeps referring to Rahul Gandhi as 'shehzada' (prince) but what about the 'shehzade' in his party. Why do they give tickets to the sons of their leaders as the Congress does," Vishwas asked, adding that his fight is not against any person but the "bad" political culture in the country.

Elaborating on the party's preparation for the April-May Lok Sabha polls, Vishwas said the party has formed a two-member sub-committee for drawing up manifestos and other related issues.

He also said that the number of seats from which AAP would fight was not yet firmed up.

"We will try to contest from as many seats in the general elections. The tickets will be given to good people only," said the poet-turned-politician.

Asked how they planned to select "good people", he said AAP volunteers would enquire from people about the candidates' background and character.

Vishwas has two daughters Agrita and Kuhu, studying in Class 10 and 6 respectively. His wife Manju Sharma is a professor in a Rajasthan college. His 76-year-old father C.P. Sharma and mother Rama Sharma live in Ghaziabad. - IANS