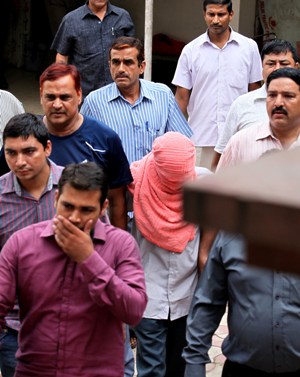 A minor, who raped a young woman in a moving bus last year along with five men, has become "more rude now, more difficult" since a year of the brutal attack that shook the nation, say officials who interact with the now 18-year-old.

The youth, who was remanded to three years in a special reform home by a juvenile court for his involvement in the Dec 16 gang rape, has not shown any sign of improvement, in fact he has become intractable.

"In the beginning, he had accepted the charge that he was involved in the gang rape. But now surprisingly he denies his involvement. Also, there is no improvement in his behaviour. In fact, he is more rude now, more difficult," a welfare officer at the Delhi government-run reformatory home told IANS on condition of anonymity.

"He is calm most of the time, but his behaviour has shown change since the verdict. He is among those minors, who take time to reform. It may take some more years. We are hopeful," said the officer.

A native of Badaun in Uttar Pradesh, the juvenile had come to Delhi eight years ago and had done odd jobs.

On Dec 16 last year, he had gone to meet Ram Singh, the prime accused, to return money he owed him. The minor had taken along a bottle of wine.

After consuming the liquor in the bus with Ram Singh and four others, they had gone on a joy ride. It was at this time that they picked up the 23-year-old trainee physiotherapist and her male friend.

The accused gang raped the girl and dumped her and her male friend on the road -- bloodied and without clothes after nearly an-hour long ordeal. The victim died 13 days after due to grievous injuries.

The welfare officer told IANS that on several occasions the boy has used abusive language while talking to the staff.

"If someone does not heed to his demand, he threatens that person. He threatens the welfare officers and tells them that he would complain about them to the magistrate.

"He knows that no one can harm him here (the reform home)," the officer told IANS.

The juvenile, described by the police as the "most brutal" among all the six accused, was put in the reformatory home in north Delhi's Majnu Ka Tilla Dec 22 last year, a day after he was arrested from east Delhi's Anand Vihar bus depot when he was trying to flee.

A Juvenile Justice Board court Sep 1 remanded him to three years in the reform home. Three years is the maximum punishment a minor gets for committing a heinous crime.

Another officer said they have been trying to counsel the boy. At the time of the Dec 16 incident he was six month short of 18 years.

As Indian laws consider someone less than 18 years as minor, the accused was tried by a juvenile court.

"We have tried many times to make him realise his crime. We have been counseling him. But he has not shown any remorse," the officer added.

The reformatory home has three types of accommodation for inmates, including a separate one for those convicted of heinous crimes.

The minor has been lodged in one of these special 8x8 feet room and is closely observed round the clock.

"For his safety, he has been kept separately out of reach of other inmates. We keep him under constant watch as we don't want him to harm himself," another source told IANS. At the moment, the home houses 21 boys.

On the steps they take to reform the minors lodged in the home, the officer said a psychologist interacts with the juvenile and then sends his report to the magistrate.

"The minor studies separately in his room. We want him to read and write," the officer said, adding that the boy had studied till Class 3 and can now sign his name both in English and Hindi.

The officer added: "We still have time. We hope the constant interaction with counselors and psychologists will help him in the long run. Lets see. Time will tell." - IANS