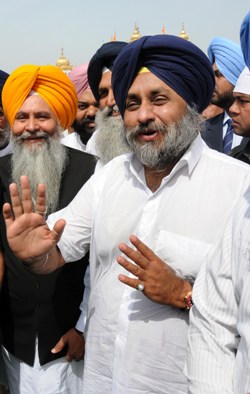 The way Punjab's ruling Shiromani Akali Dal has positioned itself, thanks to the corporate style functioning of its president Sukhbir Singh Badal, and the trio, including his wife and brother-in-law, who call the shots in the state, is now the talk in political circles across the state.

Badal, 50, has built a firm grip over the party and the Punjab government, which is headed by his chief minister father, Parkash Singh Badal, and calls all the shots.

The Akali Dal leadership, which once had the image of aging leaders with flowing white beards and a rural outlook, is now more in the hands of younger leaders.

The most important people in Punjab's ruling party politics is the trio of Sukhbir Badal, his wife and Bathinda MP Harsimrat Badal and his brother-in-law Bikram Singh Majithia (Harsimrat's younger brother). Majithia is a cabinet minister in the Badal government and is known to implement most of the things that the trio plans for the party and the state.

Sukhbir Badal, a successful billionaire businessman with interests in hotels, the media, real estate, agriculture and other sectors, is known to be a fast decision-maker and wants things implemented faster. While the senior Badal, who is the country's oldest chief minister at nearly 86, was known to take top leaders along in decision making, Sukhbir Badal takes his own decisions.

Badal has in recent days been hobnobbing with the country's industry leaders and top honchos in Mumbai, New Delhi and Bangalore to seek investments for Punjab. The big names that he has met recently include Reliance Industries chairman Mukesh Ambani, Tata Sons chairman Cyrus Mistry, Kiran Mazumdar Shaw of Biocon, N.R. Narayana Murthy of Infosys and Anand Mahindra of Mahindra and Mahindra. Badal junior has been personally giving power-point presentations to the top honchos on the investment opportunities being offered in Punjab.

Badal is holding an Investment Summit in Chandigarh December 9-10 at which the industry giants are expected to converge.

In all this big talk and action, other top political leaders in the Akali Dal and the Badal government hardly have a say. Even the chief minister's son-in-law Adaish Pratap Singh Kairon (married to Sukhbir Badal's sister Preneet), who is also a cabinet minister, and other ministers hardly have much say on important issues of governance and politics.

Even the Akali Dal's alliance partner, the Bharatiya Janata Party (BJP) that has five ministers in the Badal government, has been relegated to the sidelines.

While Sukhbir Badal's initiative for attracting investment is commendable, because Punjab has hardly seen any of this since the early 1980s when terrorism raised its head, the results on the ground are yet to be seen.

The reality is that land prices are so high that any investment becomes financially unviable at the very outset. But Sukhbir Badal intends to offset this by offering acquired land to the big names in the industry and technology sectors. - IANS