India helps save 26 crew from sinking ship near Yemen 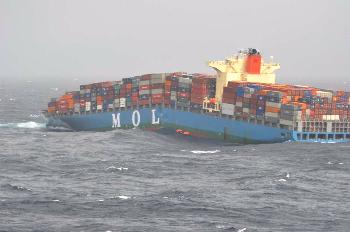 In a humanitarian gesture, the Indian Coast Guard (ICG) Mumbai, coordinated operations to help rescue 26 sailors from a massive container vessel which snapped into two and sank off Yemen, a top official said here Monday.

The incident happened early Monday, when the hull of the 316-metre-long cargo container ship - MV Mol Comfort - broke into two and the crew was forced to abandon it, said ICG Mumbai Commander S.P.S. Batra.

The ICG Mumbai immediately got down to rescuing the sailors from the rough seas, where waves rose to six metres and were accompanied by strong winds, Batra said.

Diverting vessels plying in the vicinity with its officials co-ordinating the operations, the ICG helped to successfully rescue the 14 Filipino and 12 Russian crew from the MV Mol Comfort.

The doomed ship was carrying a cargo of 4,500 containers from Singapore to Jeddah.

The cause of the disaster, details of the ship's ownership and type of cargo on board were not immediately known.

Batra said that for the rescue efforts, the ICG Mumbai diverted three ships, MV Hanjin Beijing, MV Zim India and MV Yantian Express, the last of which was closest to the disaster site.

The MV Yantian Express managed to rescue all the crew which had escaped in two life rafts and one lifeboat. They are being now taken to Colombo, Sri Lanka.

The broken vessel sank shortly afterwards in the same position, with many containers scattered in the Arabian Sea, with an indeterminate quantity of oil spill. - IANS