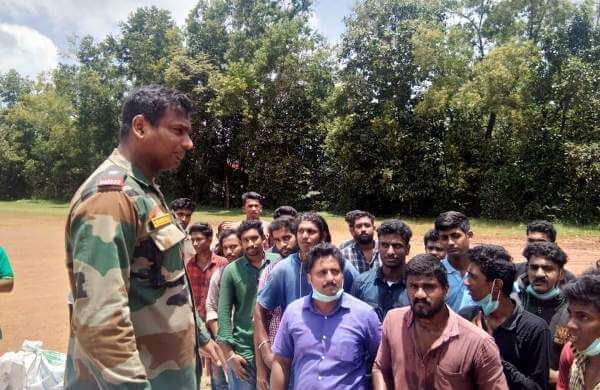 Maharashtra hero, the late Col. Santosh Mahadik's widow Swati Mahadik was on Saturday commissioned into the Indian Army as a Lieutenant, officials said.

As she completed her parade in Chennai on Saturday, Lt. Swati Mahadik broke down and her family members and a senior army officer's wife consoled, hugged her and wiped the tears of joy.

Present on her proud moment were her two children -- daughter Kartikee, 12, and son Swaraj, seven, her grieving mother-in-law Kalindi Ghorpade, her father Babanrao Shedge and her mother.

Col. Mahadik, who was Commanding Officer, 41 Rashtriya Rifles, was killed in a gunfight with terrorists in the jungles of Haji Naka area near the Line of Control in Kupwara district of Jammu & Kashmir in November 2015.

In his sacrifice, the expert paratrooper and a combat underwater diver saved the lives of many men under his charge and was later posthumously awarded the Shaurya Chakra by the government of India.

The Mahadiks hail from Pogarwadi village in Satara district of western Maharashtra.

Col. Mahadik hailed from an ordinary family, and his father a tailor, and his brother was a milkman. With the intention of joining the army, he studied in the Sainik School from class six. – IANS with additional inputs from TWL Bureau