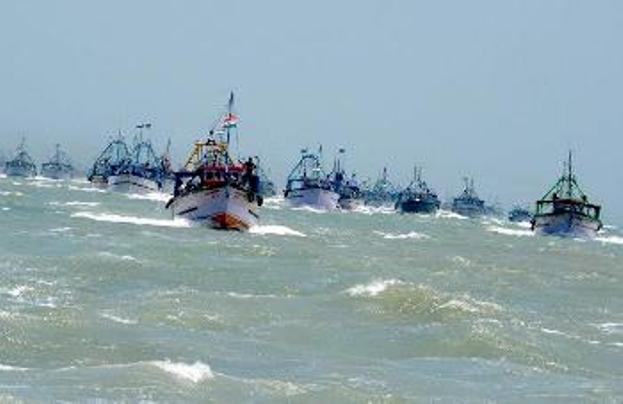 An affidavit filed by KR Nautial, Deputy Director-General of Indian Coast Guard, in the Madurai Bench of the Madras High Court on a contempt petition against officials for disobeying orders to provide security to fishermen in the Palk Bay betrays its contempt for fishermen, poorest of the poor in the country, and ignorance of legal position.

The affidavit said that 36,865 Indian fishing boats had crossed the International Boundary Line in the Palk Bay and indulged in poaching as well as smuggling in the Sri Lankan waters between January 2014 and February this year and that the Sri Lankan Navy had evidence to prove it.

The External Affairs Ministry should read out to Coast Guard officials Articles 5 and 6 of the treaty India and Sri Lanka signed on 26 June 1974 while ceding Kachchativu, an integral part of Ramanathapuram district of Tamil Nadu, to Sri Lanka.

The deed was signed by Prime Minister Indira Gandhi on behalf of India, and Srimavo RD Bandaranaike, Prime Minister of Sri Lanka. Article 5 says, “Indian fishermen and pilgrims will enjoy access to visit Kachchativu as hitherto and will not be required by Sri Lanka to obtain travel documents or visas for these purposes.” Article 6 says, “The vessels of India and Sri Lanka will enjoy in each other’s waters such rights as they have traditionally enjoyed therein.”

The treaty has neither been amended nor abrogated and as long as it remains valid Articles 5 and 6 also remain valid. The IMBL agreement officials of the two countries signed on 23 March 1976 said in its preamble itself that the boundary in the ‘historic waters’ of Palk Strait has already been settled by the Kachchativu agreement of 1974.

The Sri Lankan Navy has installed surveillance radars in Kachchativu and captured the images of the 36,865 Indian fishing boats engaged in legitimate activity in the historic waters. It is most unfortunate the Coast Guard should swallow hook, line and sinker the false propaganda put out by the Sri Lankan Navy to deny Indian fishermen their legitimate right.

The ill informed affidavit gives a handle to the Sri Lanka government to take away the livelihood of Indian fishermen. External Affairs Minister Sushma Swaraj’s advice to the impoverished fishermen from the south to desist crossing the IMBL in the ‘historic waters’ of Palk Bay and to take to deep sea fishing is like the callous advice of Queen Marie Antoinette to poor peasants in France who could not afford to buy bread to eat cake.
Deep sea fishing is not only capital intensive, it also requires specialised training.

Ceding Kachchativu to Sri Lanka without observing Sections (c) and (d) of Article 3 of the Constitution has been challenged by two former Chief Ministers of Tamil Nadu in the Supreme Court where decision is pending. If the BJP government of Narendra Modi cannot make Colombo see reason and honour Articles 5 and 6, it should not hesitate to abrogate the treaty ceding Kachchativu to Sri Lanka.