Going Gaga Over a Raw Deal 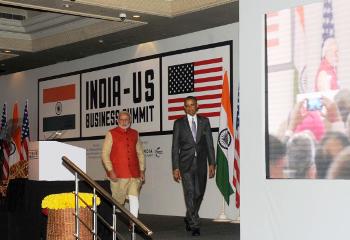 Indian media, the electronic one in particular, went gaga over the ‘historic breakthrough understanding’ reached between visiting US President Barack Obama and Prime Minister Narendra Modi that would allow commercialisation of the Indo-US civilian nuclear agreement reached in 2005.

The 59-para joint statement issued at the end of the marathon talks between the two leaders on Sunday contains just one sentence on this celebrated subject, “Noting that the Contact Group set up in September 2014 to advance implementation of bilateral civil nuclear cooperation has met three times in December and January, the leaders welcomed the understandings reached on the issues of civil nuclear liability and administrative arrangements for civil nuclear cooperation, and looked for the US-built nuclear reactors contributing to India’s energy security at the earliest.”

The Civilian Nuclear Damage Liability Act, 2010, based on the principle of ‘polluter pays,’ which the BJP voted for in Parliament, imposes unlimited liability on nuclear technology suppliers. America’s unwillingness to honour this Act stood in the way of operationalising the Indo-US civilian nuclear agreement so far.

While the USA stood by its position, India has compromised. It is the Indian taxpayer who will indemnify the American supplier in the event of an accident under the ingenious Insurance Pool scheme of Rs. 1,500 crore to be shared 50/50 by insurance companies and the government of India. This amounts to victims of nuclear accidents in the country themselves paying for the compensation.

Polluters like the 1984 Bhopal gas tragedy can go scot-free without let or hindrance. For surrendering so much, Obama assured Modi that the USA would extend support for India’s membership in four nuclear regimes, the Nuclear Supplier Group, Wassenaar Arrangement, Australian Group and the Missile Technology Control Regime. India’s entry into these high table would only drag the country into the 1968 Nuclear Non-proliferation Treaty.

The Modi government’s keenness to buy enriched uranium fuelled reactors of untested design that America itself is unwilling to install on its territory is intriguing. If proper costing is done and put through competitive bidding route, there would be no takers for these nuclear power plants in India.

Proper costing of nuclear power plant should include the price of land, cost of construction, plant and machinery including reactor, storage of spent fuel for hundreds of years, decommissioning and money spent on the project, at the prevailing market rate of interest. It would be found unviable with danger of a Chernobyl or Fukushima-type accident.

By giving up its promise to buy American or French reactors, the two foreign suppliers in the market, or joining the NSG, India can at any time resume testing thermonuclear deterrent to keep pace with neighbouring Pakistan, which is being supplied with nuclear missiles and related technologies by China.

Moreover, 30,000 Mithi Virdi villagers of Gujarat’s Bhavnagar district, whose lands the Nuclear Power Corporation of India Limited has threatened to acquire to install six 1,000 MW Westinghouse Electric Corporation nuclear reactors against their will, can be spared of their agony.