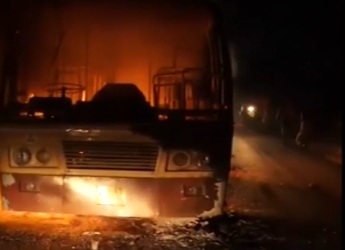 The sentencing of five Indian fishermen to death by a Colombo court last week was a political act and not a legal one and India’s response also should be political rather than legal. Appeal against the death sentence in the Sri Lankan Supreme Court would only produce a verdict desired by President Mahindra Rajapaksa.

He had laid low the independence of the judiciary by getting rid of the 43rd Chief Justice, Shirani Bandaranaika, by locking the main gates to the Supreme Court to prevent her entry, installed Mohan Pieris in her place, and undermined the rule of law.

Towards the closing months of 2011, due to consistent pressure by India, Rajapaksa ordered the Sri Lanka Navy to refrain from shooting fishermen from Tamil Nadu fishing in the waters around Kachchativu, the tiny islet which was a part and parcel of Ramanathapuram district gifted to Sri Lanka in 1974 by Indira Gandhi without observing constitutional provision regarding ceding of territory to a foreign country. The issue is pending adjudication in the Supreme Court of India.

The arrest of the five fishermen from Thangachimadam inTamil Nadu, one of them was still in his teens then, by the Sri Lankan Navy on 27 November 2011, under the trumped up charge of smuggling narcotics, was part of a hidden agenda to frighten and keep them out of the Kachchativu waters.

According to the prosecution, the five fishermen transferred 995 grams of heroin to three Sri Lankan fishermen off Delft Island on the Jaffna coast. GPS data produced by defence lawyer established beyond doubt the Thangachimadam fishermen were nowhere in the vicinity of Delft Island on that fateful day.

The three Sri Lankan fishermen also denied any role in the plot. If it was a genuine case of smuggling the trial should have taken place in a Jaffna court, not in Colombo. When Narendra Modi invited Rajapaksa for his swearing in ceremony the latter announced that all fishermen from Tamil Nadu imprisoned in Sri Lanka would be released. Why an exception was made in the case of this unfortunate five?

The five fishermen from Tamil Nadu were abducted from the waters around Kachchativu by the Sri Lankan Navy which was an act of aggression. It wanted to send a clear message to Tamil Nadu fishermen to keep off Kachchativu waters. While ceding the islet to Sri Lanka, the rights of Indian fishermen to carry on their traditional activities were fully protected.

The 1976 maritime boundary agreement between the two countries deliberately kept Kachchativu out of its purview because it had already been dealt with extensively in the 1974 agreement. With Chinese submarines roaming the Sri Lankan coast, the options of Indian Coast Guards and Navy are limited.

Rajapaksa expects his country’s Supreme Court to confirm the death sentence so that he could make a grand gesture of pardon and win over the sympathy and support of the Tamils as he faces a crucial election for a third term as President.

﻿Delhi to become first state to have 1,500 electric buses: Gahlot