Nagpal walked into a trap laid by sand mafia 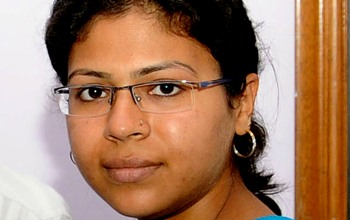 What is the Durga Shakti Nagpal story all about? Is it about a 28-year-old IAS officer, sub-divisional magistrate of Gautam Budh Nagar, trying to live up to her name?

The question does suggest itself when you visit her office. At the end of a long verandah, her name and designation in Hindi, are carved onto a dark blue wooden tablet jutting out of the cracked, yellow wall. But in her room, suspended from the wall, is a calendar with Durga-Shakti, the Goddess, I mean, riding a tiger.

The calendar is actually an advertisement, a sort of promotional gift from a group of lawyers with offices in NOIDA, Lucknow and Allahabad. For an itinerant journalist, this is helpful.

I call up one of them. It was like having touched a beehive. They were agitated. They insisted I stop at the magistrate’s office for a meeting with them.

In the five months that Nagpal has been riding the tiger in the area, she must have worked very hard to have united the lawyers against her. My experience of lawyers in UP’s cities and towns has been uniform: they are mostly upper caste and inclined towards the BJP.

But here the Sharmas and the Vermas were screaming themselves hoarse about the upper caste “SDM’s arrogance”, her “threatening manner”, use of “foul language”, a sort of unrestrained assertiveness. This is the universal image of the officer who has dominated headlines these past two weeks. What underpins this image is probably her inexperience.

Quite as uniform is another, more positive image of her: she is a “firm” officer. I did not meet a single person who was not supportive of her campaign against the “sand mafia”.

What Nagpal appears not to have realized is that mafias of any kind do not exist in a vacuum. They have political clout underpinned by mutual profit - for themselves and for the political party in power in, say, Lucknow.

In April 2010, when Mayawati was chief minister, the Ganga and Jamuna riverbed between Allahabad and Kausambi was monopolized by a Dalit mafia: Kapil Muni Karvaria and Girish Pasi, both BSP leaders.

The sitting MP, Surendra Nagar, is therefore, also a Gujjar, but on a BSP ticket. The Congress candidate is Thakur Dhirendra Singh, a Rajput. His claim to fame is that it was on his motorcycle that Rahul Gandhi surveyed the nearby Bhatta Parsaul scene in 2011. With the 2014 election round the corner, every political party has an interest. The BJP is still undecided between a Thakur and Brahmin.

Ever since, Nagapl took charge as SDM, she has been sending out special squads to stop sand dredging and loading onto trucks.

She has arrested 15 people and imposed fines of several crores on those caught. Hundred of trolleys and dumpers have been confiscated. The sand mafia was obviously rattled. In fact the entire construction industry was in a state of shock.

And this construction industry is one of the biggest in the country - Sports City, Greater NOIDA Expressway, 82 colleges, four universities and apartment blocs upon apartment blocs. This requires sand. But license for mining along 20 miles of the river is granted only to one person. This dummy “miner” is the cover for hundreds of crores worth of sand.

So far, so good. But how did Nagpal turn upon the mosque in Kadalpur village which is what the controversy is all about and which has caused Akhilesh Yadav’s government to suspend her? What did the mosque have to do with the sand mafia?

Scores of trucks loaded with illegally mined sand, confiscated by the SDM, had to be auctioned. The highest bid on one such occasion was for Rs.8 crores. It turned out that the bidder, obviously a “dummy” set up by Bhati, disappeared without depositing the amount he had bid for.

At the last minute, someone raised his hand and bid for one crore. Nagpal smelt a rat. There was a clear “fix” between the two bidders. She canceled the auction and invited new bids. Tired of this endless cat and mouse, the mafia thought of a deep plot.

Akhilesh Yadav cannot punish an upright officer, implementing the law in a way that pulverizes the sand mafia. We (said the Mafia) can't catch her on that score. But in her campaign against mining, she has exposed a chink in her armour: she has come to loath Bhati. She will see red if Bhati provokes her.

The plot took this into account. Bhati would donate, say, Rs.51,000 towards the construction of a mosque in Kadalpur village. This would serve two purposes. For the 2014 election, he would have the support of not only 75 percent Muslim population in Kadalpur but also in the other eight villages in the vicinity.

If the news of his help to the Kadalpur mosque is communicated to Nagpal, spiced with the mirch masala that it was being constructed illegally on government land, she would come galloping on a charger, all guns blazing. And if the gods were kind to Bhati, she might in her temper even be tempted to demolish the mosque.

This exactly is what happened. Could any government in Lucknow have reacted differently on the eve of crucial elections?

Bhati, of course, lost a winning hand. He was keen to create the impression that the Samajwadi Party high command was supporting him by suspending Nagpal. The Samajwadi Party, meanwhile, was paranoid that it must not be seen to be supporting the demolition of a mosque. And it had to punish Nagpal before the Congress took advantage.

Postscript: Should we not spare a thought for the Muslims trapped during Ramadan in a needless controversy about a mosque which does not exist? It was a tarpaulin roof and a six feet high brick-and-mud wall demolished at Nagpal’s behest. No onion dome, no minarets, nothing.