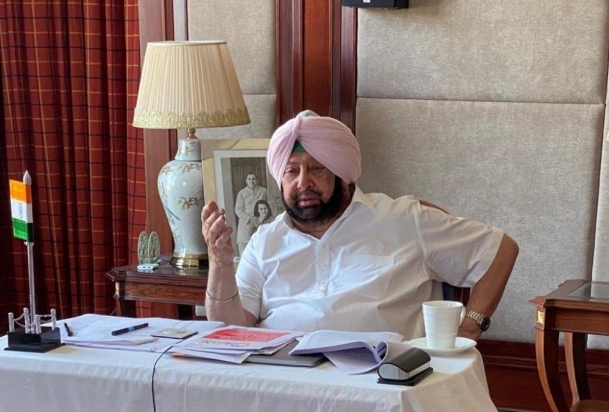 Punjab Chief Minister Amarinder Singh on Tuesday termed the Akalis' decision to hold a state-wide 'chakka jam' on September 25, the day when Punjab's farmers had already announced a lockdown against the farm Bills, as yet another brazen attempt by the BJP ally to exploit the sentiments of the farmers.

"Why don't you go to Delhi and do a chakka jam outside the homes of BJP leaders and others who have shamelessly sold off the interests of Punjab's farmers to the big corporate houses for their own petty interests?" the Chief Minister said, daring the Shiromani Akali Dal (SAD) to quit the Central government if it really cared for the farmers.

Amarinder Singh lambasted SAD President Sukhbir Badal and his wife Harsimrat Kaur for continuing to indulge in their hypocritical pretense of standing with the farmers in the face of the blatant attack on their livelihood by the very government of which the Akalis are a part.

"What are these double standards? Why did your core committee today not take a decision on quitting the BJP-led NDA coalition?" he asked Sukhbir.

Questioning the SAD announcement of holding 'chakka jams' across Punjab "in league with the farmers, 'khet mazdoors and arhtiyas', the Chief Minister said this clearly exposed the Akalis' malicious intentions, since the farmers' and other organisations had already declared a lockdown for September 25 several days ago, when the Akalis were still busy projecting the unconstitutional and dangerous agriculture Bills as beneficial for the farming community.

There is clearly some malafide intent behind the Akalis' decision to jump, at this juncture, into the farmers' pre-planned agitation, he said, adding that the farmers will not be fooled by these antics.

The games that the SAD, led by the Badals, has been playing with the farmers for the past several months, beginning with the introduction of the vicious Ordinances, have totally exposed their double standards on this issue of critical importance not just to the farmers of Punjab but to the entire state, said Amarinder Singh.

The Centre is clearly out to ruin Punjab, and the Akalis have been actively supporting this agenda with all their might, he said, adding that their purported U-turn or rethink on the issue also appears to be a conspiracy to undermine their agitation. - IANS