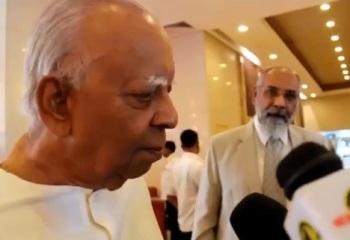 Indian Prime Minister elect Narendra Modi’s invitation to Sri Lankan President Mahinda Rajapaksa to take part in the swearing-in function to be held in New Delhi on May 26 and the consequent protests in Tamil Nadu has opened a Pandora ’s box with Tamil leaders in North Sri Lanka seizing the opportunity to highlight their grievances against Colombo.

On Friday, the Chief Minister of Northern Provincial Council, C V Wigneswaran had declined an invitation from Rajapaksa to accompany him to New Delhi for Modi’s swearing in function.

Wigneswaran had stated that “acceptance would indicate that there exists a strong co-operative spirit prevailing between the Centre and the Province, when in fact, the Peoples of the North are engulfed in a climate of fear on account of the continued presence of the Military while the activities of the Northern Provincial Council have been stultified."

Today, senior Tamil National Alliance leader and Member of Parliament R Sampanthan has leveled serious charges against the Sri Lankan government in a letter he has written to Modi that begins with warm greetings to the Indian Prime Minister designate on his “resounding victory at the recently concluded elections to the Lok Sabha and on your appointment to the high office of the Prime Minister of Bharat – India.”

However, the rest of the letter makes a no-holds-barred attack against the Rajapaksa government.

Charging the Sri Lankan government with not honouring its commitments made to India and the International Community to bring about an “acceptable political solution,” Sampanthan has accused the Sri Lankan Government of aggressively pursuing its own agenda.

According to him the Sri Lankan Government’s agenda, “prevents thousands of displaced Tamil families from occupying thousands of acres of fertile valuable land both in the North and East historically occupied by these people for residence and livelihood, in violation of commitments made by the Sri Lankan Government to both the Supreme Court and Parliament, and thus subjecting these Tamil families to extreme deprivation.”

He has further accused the government of “vigorously settling persons from the majority community with state aid on lands in the North and the East so as to change substantially the demographic composition” of Tamil areas.

Sampanthan states that the Sri Lankan government “is desecrating and destroying ancient sites of religious and cultural importance to the Tamil Hindu people in the North and East so as to radically alter the ethnic cultural and linguistic identity” of the Tamil homeland.

Referring to the controversial of role of the Sinhalese military in Tamil areas, he states: “The excessively disproportionate and oppressive presence of the military, particularly in the North and also in the East, the construction of substantial housing facilities for the military, the grave inconvenience and disruption caused to civilian life, the gender based violations, the involvement of the military in agriculture, farming, fishing and in commercial activity have a serious and adverse impact on civilian life.”

Significantly, Sampanthan has requested “an opportunity be afforded to us to meet with you and others in Government at your earliest convenience.”