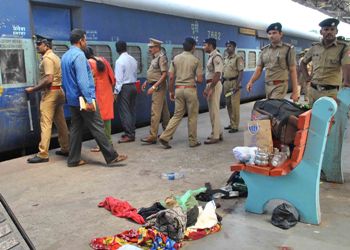 A team from Tamil Nadu's Crime Branch Friday arrived in Bangalore city to look for leads in Thursday's twin bomb blasts in the Bangalore-Guwahati train in Chennai railway station.

The special team went to look into the CCTV footages at the Bangalore station, where the ill-fated train originated, said Tamil Nadu police officials.

Tamil Nadu's Crime Branch-Criminal Investigation Department (CBCID) team is working jointly with Karnataka Police to nab the culprits who are responsible for the death of a 24-year-old Swathi from Andhra Pradesh. At least 14 passengers were also injured in the twin blasts.

CBCID Inspector General Mahesh Kumar, speaking to a television channel, Friday said the agency is coordinating with police of all the neighbouring states and is also following various leads.

The police team will also check the antecedents of some people who had booked the tickets on the train but did not board it.

Tamil Nadu Police had received intelligence warning early last month that four trained Pakistanis aged between 20 and 25 years were in Sri Lanka and planning to carry out serial bomb blasts in the state between April 15 and 17 with local help.

The bomb attacks would happen in Madurai, Tiruchirapalli (Trichy) and Chennai, the intelligence reports warned.

People who were planning to carry out the attacks, would travel from Sri Lanka to India as businessmen and arrive at Tiruvanathapuram, Chennai, Bangalore and Trichy airports, it said. - IANS