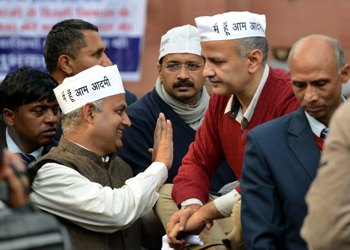 Four days since Delhi Law Minister Somnath Bharti's midnight raid on "drug and prostitution rings" allegedly involving Africans in a south Delhi neighbourhood, Africans residing in the area are still to come out of the shock and were wary of speaking to strangers.

Khirki Extension, a dingy working class neighbourhood where hundreds of Africans, largely from Nigeria or Uganda stay, bore a sombre look Tuesday afternoon. A handful of Africans were seen on the road and they even avoided eye contact. They outrightly refused to speak to any stranger. Even if somebody tried to speak, others dissuaded him. Women, especially, avoided any interaction.

When a young woman, who was buying vegetables from a cart, was approached, her friends immediately came and took her away, shying away from any more media attention after the incident hit the front pages of papers and made television headlines.

Egbulla Cannice Ilcenna, a Nigerian, had been frequenting India since 2010 but felt there is still dearth of respect from Indian men towards African people as a whole. "We, foreigners, do not enjoy our movement in this country. Indians are not cooperative towards us," Cannice told IANS.

He had been frequenting India for his business. Many Africans, especially students who come to India lured by generous scholarships from the Indian government, have made Khirki Extension their home due to lower rents than in the more swish areas of Delhi.

There are few dozens of Africans staying in Khirki, either studying in India or doing small trading businesses. There are roughly 15,000 African students across India at any given point of time.

Condemning the general behaviour of Indians towards Africans, Cannice said: "This harassment is too much. There are uncountable Indians staying in Africa; they do not face any harassment, they are given all the privileges over there."

The lanes in Khirki Extension are narrow, damp and dirty, The houses in the area were constructed in such a fashion that no sunlight falls on the lanes.

Bharti's act of knocking at the doors of Africans in the middle of the night on suspicion that they were running a "drug and prostitution racket" had created ripples across African communities. But a large section of local residents supported the minister's action and said it was required since police had not acted "illegal activities" in the area by "Africans."

The locals mostly shared the same thinking as of Bharti's. "I have been staying in this area for the last 13 years. Earlier the area was not like this. But things have changed in the last couple of years," local resident Rajesh Kumar told IANS.

He, however, agreed that all the African people staying in the locality are not into drugs and prostitution, but there were people who were giving a bad name to the entire community.

Another local, Dhiren, said in the last two years the place has changed, adding: "At night we often see bikers making rounds in the area. We do not feel safe to let our women go out alone at night, even in the vicinity."

Dinkar Khullar, secretary (west) in the ministry of external affairs, met the African envoys in South Block Saturday. He assured them that there "was no deliberate targeting of the nationals of any country and the incident should remain an aberration".

Several efforts to talk African women in the colony went in vain as nobody seemed inclined to talk to the media.

"The bone of contention here is there is no respect for foreign nationals. They have no manners to speak to our women. Even before this incident when our women used to go to the shops or in the roads they were never treated well," John Osas, another African national staying in Khirki Extension for a year now, told IANS. - IANS